Candidate For Death Theodore A. Tinsley 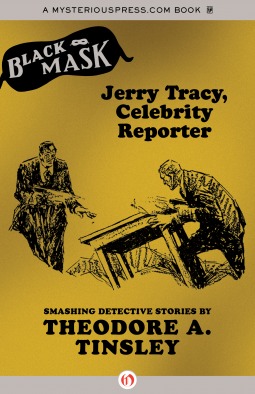 An insistent little tattoo of bunched knuckles. Silence followed. Then the sound began again. Rap, rap, rap! There was something restrained and deadly in that furtive signal on the outside of the locked door of Room 708.Tough Tony Farino had sharp animal-like ears and he was positive that the elevator door hadnt clanged once in the last twenty minutes. There had been no telephone call from the hotel desk downstairs. Whoever was outside in the dingy corridor had come up to the seventh floor without attracting attention- had gumshoed through the lobby, probably, and climbed the fire-stairs on tiptoe.The girl, Ethel, glared wordlessly at Tony.

Her hard eyes were bright with warning.Farino frowned reassuringly at her. He rose catlike to his feet. The blue-steel gleam of a stubby automatic projected snoutlike from his grimy fist. He took a noiseless step toward the door.The soft rapping sound began again.Farino waited. When the knocking ceased he pressed his flat ear cautiously against the inside of the panel. He listened, his eyes gleaming.He said, throatily, -Who is it? Whaddye want?--Okay, Tony! Open up!-A swift jerk of Tonys head sent the girl tiptoeing to a rear corner of the room where she crouched behind a battered oak dresser.

Farino grinned as he saw her slide a toy-size weapon out of her handbag. The kid was sure a strong-jawed jane- better in a rough and tumble brawl than a lotta soft-bellied mugs who called themselves hard guys. His eyes said to her silently: -Attagirl!-

Comments
Comments for "Candidate For Death":